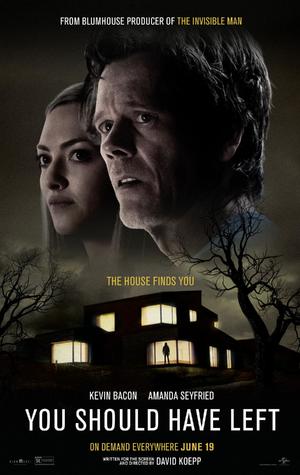 Universal Pictures has announced today that the Blumhouse thriller You Should Have Left will premiere on PVOD on June 19, 2020. Originally intended for a theatrical release, the studio had never set a release date for the film.

You Should Have Left is written and directed by David Koepp (based on the novel by Daniel Kehlmann) and stars Kevin Bacon and Amanda Seyfried as a couple seeking a restful vacation on an isolated edge of the world only to discover that secrets demand a reckoning ... and travel with you. The psychological thriller is produced by grandmaster of terror Jason Blum, Kevin Bacon and Dean O'Toole, and is executive produced by Jeanette Volturno, Couper Samuelson and Derek Ambrosi.