'The King of Staten Island' to Open in Select Theaters 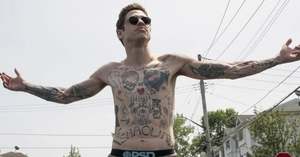 Judd Apatow's The King of Staten Island will be receiving a theatrical release after all. Originally announced to be an exclusive PVOD release on June 12, the Universal Pictures release will now also be playing in select theaters day-and-date in states where cinemas have already reopened and are opening this weekend. Universal and its specialty division Focus Features have opted to open all their movies that were on the release schedule prior to the pandemic (Trolls World Tour, The High Note) theatrically.