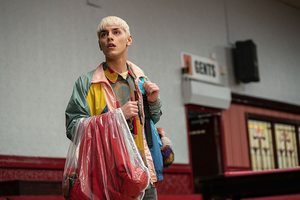 Disney announced today that 20th Century Fox's theatrical release of Everybody's Talking About Jamie has been pushed back three months to January 22, 2021. The film adaptation of the stage musical was originally set to be released on October 23, 2020. On its new release date, it will be facing Lionsgate's movie adaptation of Chaos Walking. To date, all of Fox's movies that were set for a release in theaters prior to the pandemic are still scheduled for a theatrical release.