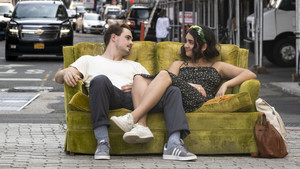 Sony Pictures announced today that Natalie Krinsky's directorial debut The Broken Hearts Gallery will be released in theaters (only) on July 10, 2020. It marks the first major studio wide release of the summer as cinemas in the U.S. begin to safely reopen. In a competitive situation, Sony Pictures Worldwide Acquisitions' Stage 6 Films acquired worldwide rights to the film from producer and financier No Trace Camping. Elevation Pictures will distribute the film in Canada.

The Broken Hearts Gallery stars Geraldine Viswanathan, Dacre Montgomery, Utkarsh Ambudkar, Molly Gordon, Phillipa Soo, Suki Waterhouse, Arturo Castro, Ego Nwodim, Taylor Hill and Bernadette Peters. The romantic comedy follows the always unique Lucy, a 20-something art gallery assistant living in New York City, who also happens to be an emotional hoarder. After she gets dumped by her latest boyfriend, Lucy is inspired to create The Broken Heart Gallery, a pop-up space for the items love has left behind. Word of the gallery spreads, encouraging a movement and a fresh start for all the romantics out there, including Lucy herself.