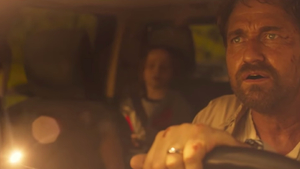 STX Entertainment has set a new release date for the the thriller Greenland directed by Ric Roman Waugh and starring Gerard Butler, Morena Baccarin, Scott Glenn, Andrew Bachelor and David Denman. The movie will be opening in theaters nationwide on July 31, 2020. The film was previously set to be released theatrically on June 12 before being taken off the schedule due to the pandemic. The movie marks the only scheduled wide release for July 31 at this point.